The following account of September 11th 2001 was written by my friend Anthony Agnelli, NYPD Detective - retired. He is a 1981 Chatham High graduate. He worked for the City of New York Police Department from 1986 to 2004 when he retired due to 9/11 injuries and illness.

On a side note Tony was the one who got me interested in CB radio and police scanners. It's partly due to him that I got my interest and had a career in communications. Yes, you can all blame him! Thank you Tony.  11-27R
​

​
Running from the Dust
​
On September 11th of 2001, seemed the sun went down around 10 AM, at least in lower Manhattan. The day started out as most do, and easy pace, usual rituals being conducted, commutes starting and folks starting their days at work or school. It quickly changed into a long and stressful day that stretched into weeks and months. By 10 the City and the world had been plunged into watching what evil truly looks like. Much of Manhattan was in a twilight masked by smoke that even the brightest sunlight couldn’t penetrate. Several times it got so dark that it seemed like midnight during midday.

All forms of communication were basically cutoff. No Cell service existed after the two main towers fell. For us down at the site, we had no idea what was going on in the world. Rumors swirled of more planes coming in. People would start running for no apparent reason, A military plane flew over causing panic on the ground. Quickly order would be restored and the Brave Rescue workers would run back to dig and search. This would occur dozens of times during the day, Hundreds of rescue workers running where they though safety was, triggered by a rumor or sound or partial collapse of a structure.

A temporary morgue inside the lobby of a high rise office building containing bodies of NYPD, FDNY and Civilians had to be hastily evacuated cause of fear of that building, which was damaged in the collapse might itself fall. We ran into the lobby and grabbed the dead and ran across the street in hopes of finding them a safe place before they could be removed from the site. A crooked hand covered in dust and flecks of blood pointed at me from beneath the sheets EMS wrapped this soul in as I ran across Liberty Street with another Cop I did not know, perhaps as a warning of the future only they could now see. The building never fell, but there was much of this mayhem the first day or two. Vesey Street, I recall was covered in 100’s of high heels, Women who were at work kicked them off to run more efficiently from the towers.

Near late afternoon, someone mentioned that a temporary cell site was up and running. I quickly checked my phone, indeed service was up. I quickly called home. My Wife answered clearly upset, My oldest Daughter in the background all excited and with many questions. They knew right where I was and where worriedly watching the TV coverage live, cameras fixed on the site and listening to the speculation of the news reporters. I had more questions for them, down at the site we knew nothing of what was going on in the world.

About a minute into the conversation 7 World Trade began to fall. 47 stories of high rise came down after burning out of control for much of the day. It fell into the now just settling debris of the two main towers now laying at her feet. Truthfully, my first clue was my wife and Daughters screams as they watched the live coverage and the talking heads yelling that another collapse was occurring. A millisecond later everyone started running, myself included. It was obvious to my wife that I was running. They put two and two together and surmised I was in danger, I could hear them screaming through the phone as I ran.

The dust cloud blasted down the street like a freight train for the third time in a day kicking up whatever was already on the ground and caught up to me like a lion chasing a wounded gazelle. It hit me in the back and passed me by as if it didn’t care and continued down the street going who knows where. It was like someone sprayed you with a sand blaster. Day turned into night and a silence that lasted to long. It wasn’t just dust, it was heavy pebble sized substance. It enveloped everything reaching high into the air and even under ground, impossible to escape and impossible not to ingest, there was no escaping it. Your mouth an underwear and shoes would be coated in it for months. It moved with such force that it blasted the leaves off the trees in the park that lead to the trade center, leaves replaced by sheets of paper from the now destroyed offices wrapped around branches. The trees now looking like a paper mache project from grade school. The whole area cloaked in an eerie ghostly grey hue for months. The dust so thick on everything that it acted as a sound barrier muffling sounds and vehicles by several decibel’s, knee deep in some areas.

In the early days there was no wash stations, along with no protective gear. We dug and carried the toxic dust everywhere we went. In our cars and ultimately home to our families, we drank and ate meals with dust on our hands on the tables of the makeshift aid stations and churches that opened their doors to take care of us. We grabbed water and food that wasn’t spoiled from abandoned Bodegas and coffee shops that once served the towers, blowing and wiping the thick dust off before consuming any calories we could find.

Many blame the Government for not telling us the danger. Believe me, we all knew. It doesn’t take a scientist to know that the Dust wasn’t good for you. Nothing would have stopped me and my brothers and sisters from going down there and digging, Zero.

Nevertheless, the dust is still with us. It kills on average 2.7 first responders per week. The NYPD lost 23 Police officers on 9/11, So far we are closing in on 200 deaths in the aftermath from 9/11 related illness. The FDNY lost 343 and will surely surpass that number in another year or so, they are in the 185 range as of this writing- (9/2018) PAPD also has lost many although I was unable to find a current number.

You’d think this far out that the numbers would decrease with time. However, in cases of toxic exposure to dust and particles it takes time for symptoms to become a problem as in Mesothelioma and other long term illnesses related to toxic exposure. As of July of 2018 10000(Yes Ten Thousand) cases of 9/11 related Cancers have been reported to the World Trade Center monitoring program. Last I checked you are 450 times more likely to be afflicted with certain cancers if you spent 40 hours at the site.
​
People who were at the site for a day or so have been gone for many years already, Myself having spent months, till the last beam was removed are still here, although sick. Family members and spouses who never set foot at the site are dead or sick, having ingested the toxic dust from clothing or in the family car brought home by their spouses, just now showing unexplained illnesses, they I might add are not recognized or covered at the present. The Zadroga Bill which affords 9/11 responders like myself, health care will expire in 2020.

Nothing worse than bringing your work home, especially when it can kill your family or shorten or at the very least make them sick. It’s heartbreaking really.

So this day, 9/11/18 once again we should never forget what occurred.
But we all should recognize the continued pain and sacrifice that many of us Responders and their families suffer. We will continue to die and fall ill forever till there are no more of us left, which might be sooner than later.

The Dust continues to chase us, overtaking us one by one. It has no remorse or care and will never ever settle.

Each Responder that falls, the fears that lay at our feet are kicked back up for all of us much in the way 7 World Trade did. Each ache or pain or sudden illness, or the prolonged nagging chronic conditions that afflict us or our family members, you feel that your time has now come, Time for you to take the march up the long ramp from the pit lined with our Brothers and Sisters.
We all will forever be looking over our shoulders. To say that it doesn’t is foolish and delusional. The sheer numbers don’t stack up in our favor. For me to live to old age will be a miracle.
Each friend or acquaintance who dies from 9/11 illness, you feel like a soldier hiding in a foxhole, each death a shell landing closer and closer to your foxhole. Dirt and rocks rain down, hitting you in the helmet, nothing to do but cover your head and hope the next shell isn’t a direct hit. Hopelessness, nothing to do but wait for it to stop.

Each report, every illness, each cough.
We are still running from the dust,
We will forever be on the pile.
​
Detective Anthony Agnelli- Retired 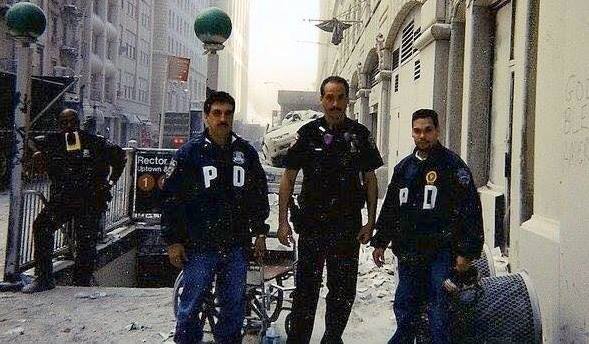