Rollover Accident Joslen Boulevard Greenport 11/11/19
Columbia County Sheriff David P. Bartlett reports that on November 11, 2019 at approximately 9:42am, Sheriff's Patrols were dispatched by Columbia County 911 for a one vehicle personal injury accident on Joslen Boulevard, just north of Hart Road in the Town of Greenport.
Deputy Sheriff's found that a 2014 Chevrolet Sonic, operated by 27 year old Beth Hillenbrand of Hudson NY, was traveling northbound on Joslen Boulevard and for unknown reasons, went off the east side of the roadway and into a ditch, striking two mailboxes and then a National Grid pole.  After striking the pole, the vehicle rolled over onto the driver’s side where it came to rest.
The operator and sole occupant had to be extricated from the vehicle by Greenport Fire Department.  Ms. Hillenbrand was then transported to Columbia Memorial Hospital by Greenport Rescue Squad for neck pain.
The accident is still under investigation. The road was closed for about one hour.
Greenport Rescue Squad, Greenport Fire Department, and Greenport Police Department assisted at the scene.
Investigating for the Sheriff’s Office are Sergeant Brian Molinski, Deputy Peter Merante, and Deputy Andrew Horst. 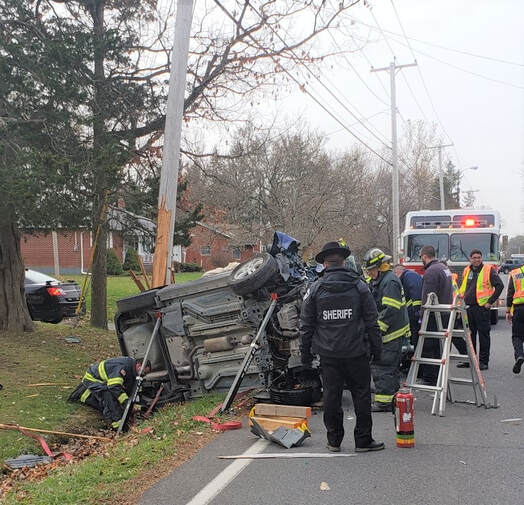