Fatal Accident Route 9 Kinderhook 09/13/15
Columbia County 911 dispatched Kinderhook Firefighters and Valatie Rescue at 2:58pm for a reported two car accident on Route 9 in the Town of Kinderhook. The accident was between Smith Road and Presidential Drive.

Stuyvesant Falls FD and Stuyvesant FD were requested by Command to assist with traffic and a helicopter landing zone.

Chatham Rescue responded mutual aid and a LifeNet helicopter responded to the scene.

Firefighters were back in service at 7:04pm.

New York State Police are investigating a 2 Car Fatal collision that occurred on State Route 9 in the Town of Stuyvesant.  The crash occurred at approximately 2:55 p.m. when Harriet M. Simpkins, 85, of Kinderhook, was southbound on State Route 9.  Simpkins veered into the northbound lane and struck a vehicle operated by Rahmal Spann, 28 years old, of Hudson, head-on.

Simpkins was transported to Columbia Memorial Hospital where she was pronounced deceased.

The 9 and 5-year-old children have been admitted to Albany Medical Center . 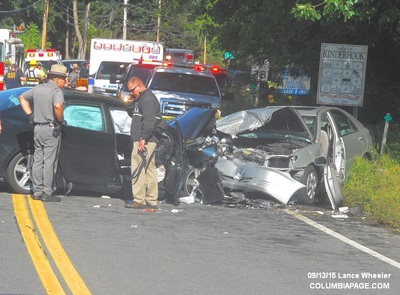 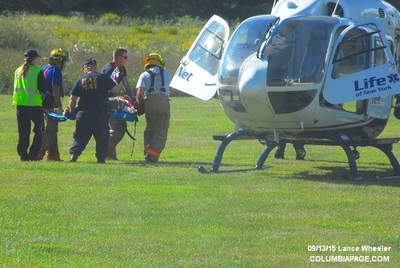