The Columbia County Volunteer Firefighters Association (CCVFA)
Firefighter of the Year Committee would like to extend a great applause
and recognition to the Stuyvesant Fire Company #1 for hosting another
spectacular convention.

Thank you to all of the men and women serving their communities in
Columbia County.

Just over 3 years ago a small group of CCVFA members set out on a quest
to recognize all of the great things our volunteers are doing in our
communities.  In conjunction with the CCVFA a committee was formed in
order to seek out, recognize and award our ‘Local Heroes’.
Every Fire Company, Department and Association has members who are
deserving of special and due recognition.
The CCVFA is pleased to announce that once again we recognized a
Columbia County Firefighter of the Year for the third straight year.

•    Nominees shall have done some deed of outstanding quality, either
during the line of firematic duty or of civic community function.  The
committee will consider all aspects of the application and nomination,
including but not limited to; forthrightness, cool and collective
action, quick thinking, leadership, use of corrective measure and lives
or property protected

•    Although significant, it is important to remember that acts of
heroism are not the qualifying factor in choosing a FFOY.

•    The CCVFA review all of the nominations after the April Quarterly
meeting and narrow the field of nominations to the top 3 nominations.

•    The award is presented to the Firefighter of the Year at the annual
CCVFA Convention on the last Friday of July of each year.

•    All 3 nominees are invited to the annual convention with the winner
being the Firefighter of the year and the two runner ups being
acknowledged and presented an Honorable Mention Citations.

•    The CCVFA will submit the names of any recipient of the Firefighter
of the Year to the Hudson Valley Volunteer Firemen’s Association and
F.A.S.N.Y.’s Firefighter of the Year.


2015
In 2015 the CCVFA received a record number of nominations.  For this
being only the third year the committee is very pleased with the
response.  All nominees should be proud of the outstanding work and
volunteering that you have done.

The first nominee who is awarded an Honorable Mention was nominated by
Lebanon Valley Protective Association.
1st Assistant Chief Mark Sheline Sr.
Chief Sheline joined the Lebanon Valley Protective Association as a
firefighter at the age of 18 and was the Assistant Chief of the
department at the time of his passing after 45 years of service to his
community.
He was an honorary member of the Chatham Fire Department, a past president
of the Columbia County Volunteer Firefighters Association, member of
the CC Fire Chiefs Association, a past president of the Hudson Mohawk
Fireman’s Association and a member the Fireman’s Association of the
State of New York (FASNY) and several other fire department
associations.
Marks several decades of service to the Fire Service are recognized and
commended.

Second Honorable Mention
This award is awarded to a group of firefighters who put their lives on
the line to save another firefighter.
1st Asst. Chief Timothy Stever
Captain Jeremy Cromie
Lieutenant Paul Strobel
On April 12, 2014 the Niverville Fire Department was dispatched at
00:59 with their FAST Team mutual aid to Stuyvesant Falls for a working
residential house fire.  They set up on the A side of the structure and
made a 360 degree walk around of the structure.  The Team was staging
on the A side when a Mayday call was made from a firefighter trapped on
the second floor of the structure.  They were quickly deployed.  Using
ground ladders to access the second floor, the team made entry and
located he trapped firefighter.  He was located with his leg trapped in
the floor within the burning structure.  The firefighter was switched
to the RIT Pack Air while the FAST Team extricated his foot.  He was
brought down to safety without further or serious injury.
The members were nominated by Chief Wayne Huyck who is a member of the
TEAM and was the commanding officer the date of this rescue.  Chief
Huyck states that he believes this be the first recorded FAST team
rescue in the county.

2015 Firefighter of the Year
When the committee met earlier this year, we encountered an
overwhelming amount of nominations for one person.  This gentleman is
probably known by all who serve the fire service, and quite possibly
has a personal story with him.
As stated earlier, this award is not specifically tailored towards one
act of heroism.  This amazing individual has made countless sacrifices
and acts of heroism over the years.

The 2015 CCVFA Firefighter of the Year has served New York State,
Columbia County and the men and women of the Fire Service for over 50
years.
Columbia County Deputy Fire Coordinator-County Car 6
Theodore ‘Ted’ Beck
Deputy Coordinator Beck was nominated by numerous departments and
companies from around the county.
He has been a dedicated county and state fire instructor for over 25
years.  He has touched the lives of countless individuals and has
probably saved more lives than any of us will ever know by the
knowledge and training he has provided.
Ted was a Charter member of the Columbia County HazMat team and
continues to be a member of the Stuyvesant Falls FD.
Ted is a tremendous example and inspiration to all in the fire service.

Congratulations to all recipients from the members of the Columbia
County Volunteer Firefighters Association. 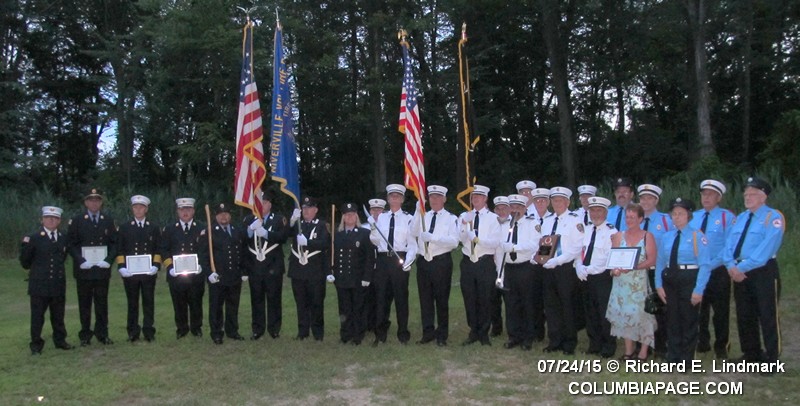 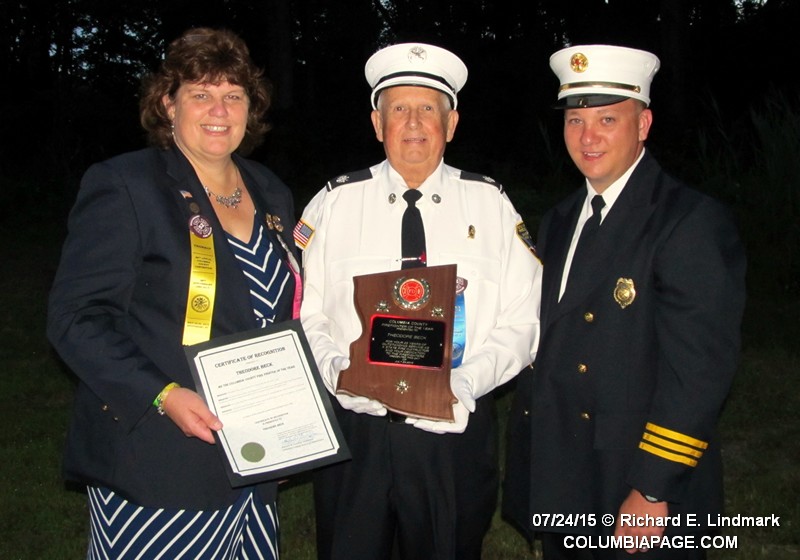