Several well deserving firefighters were recognized for a variety of reasons, from heroic acts, to complete dedication to their communities and for a lifetime of unparalleled community service.
Joining the CCVFA at the convention to honor our firefighters were Columbia County Board of Supervisor, Chairman Matt Murell, Columbia County Fire Coordinator William Hunt, Retired Fire Coordinator John Howe, Deputy Fire Coordinator Joseph Loeffler, CCVFA President Michael Cesternino, Vice President and FFOY Committee Chairwoman Laura Foster and the entire CCVFA board of directors.

The Firefighter of the Year committee along with CCVFA Past President Michael Cesternino, newly minted President Laura Foster and Committee spokesman Eric Barnes congratulate all of the honorees and winners.  We look forward to seeing you next year in Germantown! 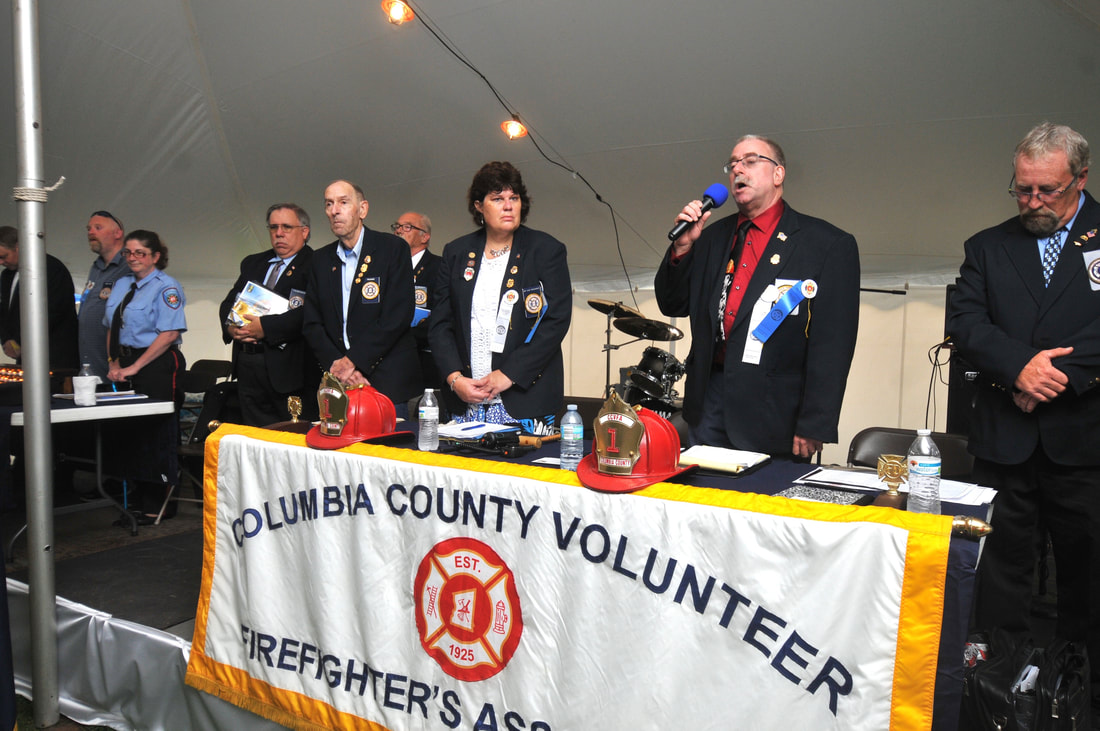 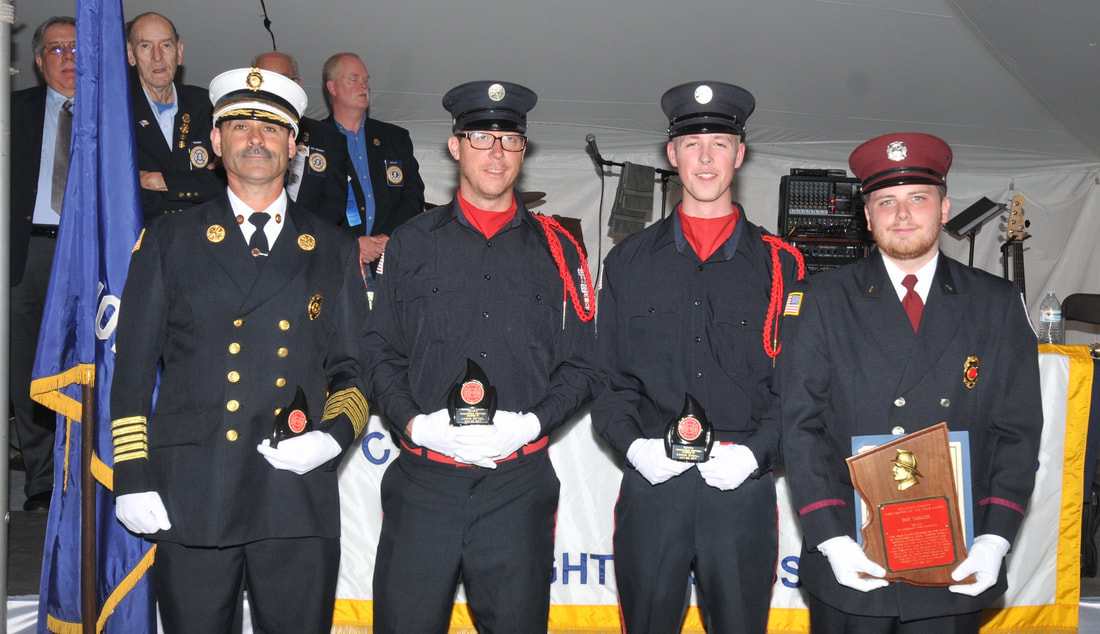 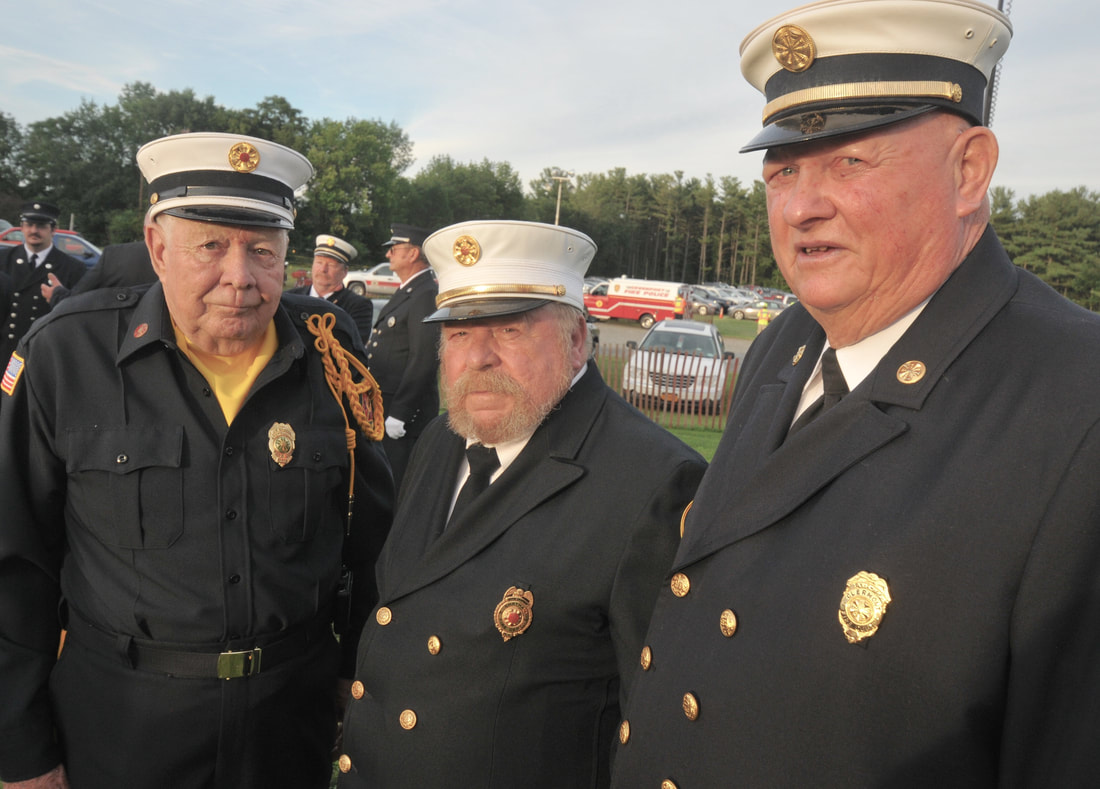 ​
The first 2017 nominee who is awarded an Honorable Mention Award
for Firefighter of the Year was nominated by the Philmont Volunteer Fire Company #1
Chief Mark Beaumont
Chief Beaumont, joined the Philmont Fire Department in 1999 after transferring from the City of Hudson Fire Department.  He quickly rose through the ranks of lieutenant, captain and assistant chief.
In April of 2013 he was elected Chief.  He was nominated by the members of his department for the outstanding work he has done for the department and the community at large over the past several years.  He was recognized for his overall commitment to the Fire Department and the Village.  He has overseen the securing of multiple grants for financial support, fund raising and the FD Losap Program in order to maintain the best recruiting and retention programs possible.  Moreover, Chief Beaumont was the driving force behind establishing and rejuvenating the Philmont EMS program.  Since the disbandment of the Philmont Rescue Squad, many saw the void left behind.  Chief Bauemont spearheaded an initiative to bring fire responder EMS back to the village.
​
The second 2017 Honorable Mention Award for Firefighter of the Year is presented to:
Firefighters Conor O’Neill and Jason Detzel
On April 11, 2016 at approximately 11:30 pm the City of Hudson Fire Department was dispatched to a working structure fire at 18 Worth Ave. in the City.  There were reports that victims were still inside the building and could not evacuate the second floor.
Under the command of Chiefs James Schermerhorn and Shawn Hoffman, Engine 30 arrived on scene going to work to rescue the residents.  Firefighters O’Neill and Detzel deployed a ground ladder to the 2nd floor where a pregnant mother and daughter were trapped.  They were safely rescued to the ground without injury.
We are lucky to have such a dedicated group of volunteers that go above and beyond to place themselves in danger in order to save others.
This is just another fine example of true acts of heroism displayed by our volunteers here in Columbia County.


The 2017 Columbia County Volunteer Firefighters Association
Firefighter of the Year Award is presented to:

Firefighter Daniel VanAllen
It takes an uncommon valor to run towards acts of violence or traumatic events.
On the night of December 2, 2016, that is exactly what Firefighter Dan VanAllen did.  On a cool December night firefighter VanAllen was traveling home from dinner with his girlfriend.  As they approached the intersection of State Route 9 and Route 28 in the Town of Kinderhook, he observed smoke coming from a vehicle.  Dan immediately pulled over and approached the car.  He could hear someone yelling for help.
Without hesitation, Dan did what all heroes do, he reacted to help another human without regard for his own life and safety.
Firefighter Van Allen saw two cars in the road that were severely damaged from what appeared to be an accident, with one of the vehicles on fire.  He observed two victims still inside the burning car.
Firefighter VanAllen quickly assessed the situation, was able to force the door open to the driver’s side and extricate the female victim.  He then went to the passenger’s side where the female victim was complaining of a lot pain.  Knowing the urgency of the situation, he was able to force her door open, remove her seatbelt and safely carry her from the vehicle that was becoming engulfed in flames.  Both victims were removed to a safe distance from the car to await EMS.
Dan was able to utilize a passerby’s cell phone and call 911 to explain the situation, while still caring for the women until EMS arrived.
But, not for Firefighter VanAllen’s quick thinking and valiant efforts to rescue the injured women from the burning vehicle on this cool December night in 2016, this incident could have been a tragic loss.  This courageous act of heroism is a true example of the volunteer firefighter.

The first 2017 nominee who is awarded an Honorable Mention Award
for Lifetime Firefighter Achievement was nominated by the Clermont Fire Department
Chief James Potts Sr.
Chief James Potts Sr. (ret.) joined the Clermont Fire Company in 1956 and held various ranks in the fire department, attaining the rank of Assistant Chief in 1968 until 1983 when he was elected Fire Chief for five more years.
In 1991 Chief Potts became a fire company director and has maintained that responsibility for the past 26 years.  Mr. Potts was first elected as a delegate to the CCVFA in 1965 and continues to serve as a delegate for his company.  In 1999 he was instrumental in bringing the convention to Clermont for the first time. In 2016 Chief Potts completed and celebrated 60 years of fire service to the Clermont community, a feat that is not often accomplished.  He is well known and respected throughout the entire Columbia County community as a “go to guy”.

The second 2017 nominee who is awarded an Honorable Mention Award for Lifetime Firefighter Achievement was nominated by the Stottville Fire Company
Chief James Briscoe
Chief James Briscoe (ret.) began his fire service in 1954 when he joined the Claverack Fire Company.  In 1955 he transferred and continued his service in Stottville where he continues to serve this day.  Chief Briscoe has held various ranks in the fire department, where he has served as Fire Chief of the Stottville Fire Company for 30 years. Moreover, in 1963 Chief Briscoe joined the ranks of the Fire Coordinator’s Office where he served as Deputy Fire Coordinator from 1963-1976.  He was appointed Columbia County Fire Coordinator from 1976-1984.  Some of Chief Briscoe’s other lifetime achievements include: Fire Advisory Board 1976- Present, EMT – for 25 years, Greenport Rescue Squad Board of Directors, NYS Association of Fire chiefs since 1963, Columbia County Fire Chiefs Association where he was secretary for 20 years.  Most recently Jim has served as a Fire Commissioner to the Stockport Board of Fire Commissioners, Fire company trustee and is the current Fire Company President.  While many of his peers would be satisfied to shift gears as they reach their 70’s into a roll of fire police or advisor, Jim continues to serve as an active firefighter and truck operator.

The 2017 Columbia County Volunteer Firefighters Association
Inaugural Lifetime Firefighter Achievement Award is presented to:
Chief David E. “Chappie” Chapman
There are very few people whom are looked up to by fellow firefighters that fit this mold, than Chappie himself.  David E. Chapman, universally and affectionately known as "Chappie" has an unparalleled body of work in the fire service which began on April 1, 1963 at the age of 19 when he joined Chatham's Sanford W. Smith Hook and Ladder Company. His indefatigable service continues to this day. We are deeply indebted to Chappie, for within his gray matter rests a vast repository of history relative to Chatham that's not just peculiar to our fire house. He is an absolute font of knowledge on many fronts, the fire service being just one of his exemplars. He is very well read and can hold sway on a number of topics with patient deliberative arguments that are persuasive as well as convincing. One would think, that an individual with these skill sets would be cocky, arrogant, or perhaps condescending in tone and tenor. Nothing could be further from the truth. In truth, Chappie is an intelligent, patient and caring man, with a sharp as a tack wit, infectious laugh, coupled with an indomitable spirit and spunk.  He has never shied away from work, his body of collective work speaks volumes in that regard. So in terms of a metric to measure a man's worth, we believe Chappie has checked all the boxes and most assuredly has become the standard by which others should be judged, in overall service to his family, his Fire Department, and community.  By anyone's metric, Chappie's life work has been an exemplar of how one should walk through life; selflessly giving the vast majority of life serving the needs of others, while sacrificing his own. To this day, he continues to selflessly serve as a seasoned veteran who is a master teacher and friend to all, no matter your station or rank. He has an arms's length resume dedicated exclusively to the fire service in addition to all his civic achievements, which in the interest of time, we will omit.
​
Report by Eric Barnes
​Photos by Lance Wheeler